Olivia Burke – Launch of Debut EP ‘Notes On My Napkin’ 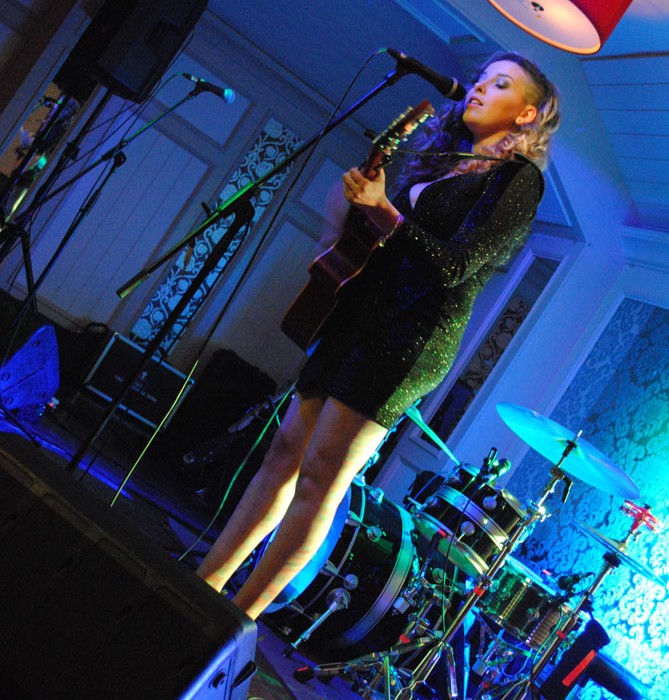 ‘Notes on my Napkin’ EP Launch

I hadn’t listened to any of Olivia’s music prior to her EP launch and that’s something I like to do occasionally before going to see artists perform.  I didn’t know her genre or signature and I didn’t source any information about her at all.

The town was Tullamore and the venue was upstairs in Hugh Lynch’s bar – an ideal space for an event like this.  On the tables were wristbands with Olivia’s website address and paper napkins with the chorus lyrics of ‘Loud’ imprinted along with a few images of headphones, radios and musical notation.  A really charming idea giving me some creative insight into the artist that I had come to see.

The MC for the evening, a local poet Richard Brennan who before introducing each artist, would recite his own spoken words adding to the variety of creativity that was going to be on display for the night.  This was a really nice twist to the event and was well received by everybody.

First up was Dominic Mahon a local folk singer-songwriter and mentor to many local acts.  Then it was the turn of Luke S. Clerkin, a singer-songwriter from Dublin who was making his 241st live appearance of this year, a very ambitious goal and one to be applauded.  Let’s hope he makes his 300th appearance by New Year’s Eve!

Olivia then steps up with her guitar to perform a few solo numbers.  I appreciated this aspect of the evening as she performed songs from her back catalogue that were pleasing to her local fan base as well as her new listeners.   This is where Olivia is showing us her style of pop and where her thoughts and ideas were taking her lyrically and musically when she wrote them.  Those songs were ‘Stronger than it hurts’, ‘The break-up song’, ‘Mask’, and ‘This is me’.   She did perform ‘Loud’ which is on the EP and a very welcomed folk/pop version of ‘I’m sexy and I know it’ showing her credible arrangement style in stripping back a heavily produced song like that and giving it a new home.

The band came out to join her and played the four tracks from the EP.  A cover of ‘little talks’ by Of Monsters and Men, (not on the EP) was a great stomping rock effort that carried very well.  Olivia has a grasp of contemporary rock and pop and is not afraid to show it.  She has a great awareness of herself and her voice and I admired her leadership with the band.   ‘Loud’ took on a whole new ball game of its own, it was simply the song of the night having performed it acoustically earlier and then ending the show with a repeat of the band’s version – yeah it was LOUD!

And that brings me onto her EP tracks where her true arrangements took shape with producer Joe Egan of Nutshed studio in Clara.  Tracklist:  ‘Loud’, ‘One Way Flight’, ‘Transparent’ and ‘Dance In The Rain’.  First of all I must compliment her artwork on the EP cover and disc, it’s a unique and colourful presentation.

‘Loud’ is the song, it’s the pop statement, it’s fun and flirtatious, it’s the catchy can’t get it out of your head tune and radio needs to play it.  ‘One Way Flight’ comes down to earth and here she is dealing with the acceptance that comes after a break-up in a friendship or romance due to emigration.  The arrangement and tempo of the song is kind to the subject and their situation.  ‘Transparent’ has a great melody and is another radio ready contemporary pop song.  ‘Dance In The Rain’ has a positive message of gratefulness and not giving up, a gentle lesson in mindfulness and a melody to match it.

Olivia has impressed me a great deal and I want to hear more from her.  She really is a phenomenal songwriter, lyrically and musically.  Olivia is an Irish Lady Gaga.  I don’t know of any other artist out there making this style of music and I really feel there’s a whole other market out there for her now.  She’s something different, breaking away from the crowd she clearly has her own direction and long may she stay on that journey.