‘The Sugarhill Gang’ to headline ‘BARE in the Woods 2016’, Laois, Ireland 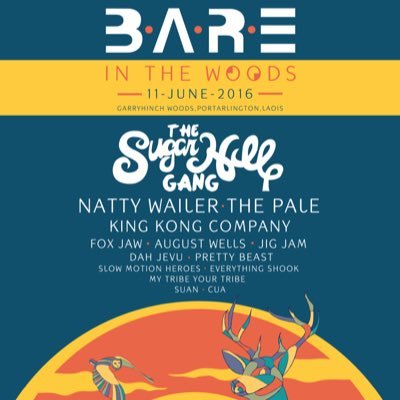 New York hip hop legends The Sugarhill Gang are announced today as one of the headliners for this year’s BARE in the Woods Festival, taking place at Garryhinch Woods, Co Laois, on June 11-12 this summer.

Best known for their era-defining hit ‘Rappers Delight’, TheSugarhill Gang were the the first rap artists to break the Top 40 on the US Billboard Top 100 Chart and were the inspiration for many subsequent hip hop acts through their label Sugar Hill Records.

The Sugarhill Gang will headline BARE16 alongside reggae legend Natty Wailer. Natty has toured and recorded with Bob Marley for a decade before performing live as a solo artist. A festival favourite, Natty knows how to stir it up in the best possible sense of the words.

Complimenting the international headliners on the BARE16 bill are some of this country’s finest live performers in King Kong Company, The Pale. These two have been tearing up festival stages over the last few years so BARE16 audiences will know what to expect. Some of the other first acts announced on the feature an eclectic mix of aritsts, from electronic to reggae, indie to folk and beyond – including Fox Jaw, August Wells, Dah Jevu, Pretty Beast,Slow Motion Heroes, Everything Shook, My Tribe Your Tribe, Suan and Cua.

With a mission statement to “to create on of the best boutique festival sites in Europe and bring an event that has something different to offer the festival season in Ireland”,  the BARE festival site compliments its natural surroundings using timber sourced from the site itself to build some very creative stages and structures. It is also one of the best priced festivals in Ireland with camping tickets for the 24-hour event priced at only €40 for a Day Ticket and €50 with camping.

This is will be the third BARE in the Woods festival – the previous two were sell outs – and it was the winner of an Irish Festival Award this year for ‘Best One Day Festival’ 80% of timber used on the site has come from storm damaged trees and has been milled on the site bythe BARE crew. The site itself is nestled beside the River Barrow and overlooked by the Slieve Bloom mountains and features a traditional Irish Crannog and a lake with a party island that will run late in to the night. Further announcements are due for BARE16 next month inApril.