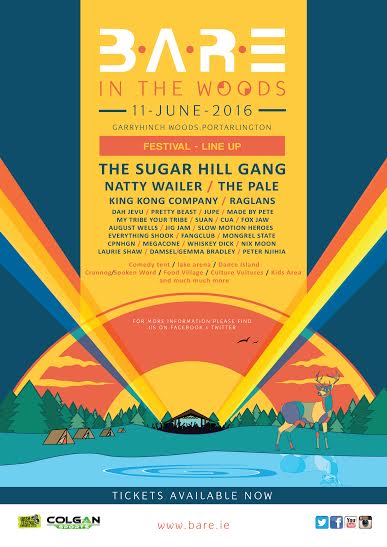 BARE in the Woods will also welcome Tony Clayton Lea’s Culture Vultures to the festival for the first time, along with a soon-to-be-announced Comedy and Spoken Word line-up. BARE16 will also feature a Food Village, Dance Island and Kids Area.

With a mission statement to “to create one of the best boutique festival sites in Europe and bring an event that has something different to offer the festival season in Ireland”,  the BARE festival site compliments its natural surroundings using timber sourced from the site itself to build some very creative stages and structures.

It is also one of the best priced festivals in Ireland with camping tickets for the 24-hour event priced at only €40 for a Day Ticket and €50 with camping.

A winner of an Irish Festival Award this year for ‘Best One Day Festival’, 80% of timber used for the festival has come from storm damaged trees and has been milled on the site by the BARE crew. The site itself is nestled beside the River Barrow and overlooked by the Slieve Bloom Mountains and features a traditional Irish Crannog and a lake with a party island that will run late in to the night.