‘She Was a Question’

“Now I know – she was a question, not an answer”

Griffin’s lyricism is something to be admired, he has stories to tell veiled in metaphor and eccentricity with Drowned In Sound describing Griffin as an ‘undiscovered genius’ in a recent feature, whilst Glen Hansard introducing August Wells as his guest at a show recently told the audience how in awe of Ken Griffin he is, describing him as “such a presence, such a power”.

Ken Griffin and John Rauchenberger’s melancholic odes have struck a chord with music listeners with their critically acclaimed debut album ‘A Living & A Dying Game’ and a string of fine singles that has also seen them received warmly by critics and music shows across the dial. By turns writing music that speaks of the fragility of the human condition while all the while providing an uplifting swing and groove.“She Was A Question” will be released on June 24th with the bands Irish and UK tour which kicking off at Dublin’s Interlude festival on the same date.

‘She Was a Question’ is as much as curiosity as the title suggests, melding piano and strings, with a tranquil bass line supplied by New York-based Corkonian, Graham Finn, and peppered with a soft sounding flugel horn. August Wells continue to release poignant singles that defy the transparency of much of today’s vacuous fare, leading the listener on all-too-brief vignettes that provide something of a welcome break from the norm.

The single is taken from their new album “Madness Is The Mercy” which is due for release late July 2016 and will once again see August Wells team up with Irish independent label ‘Forever In Financial Arrears’ (FIFA Records).

Ken Griffin and pianist John Rauchenberger have met in the middle of differing musical pasts to form a band who would sit easily at the same table as Scott Walker or John Cale.

More dates to be announced…… 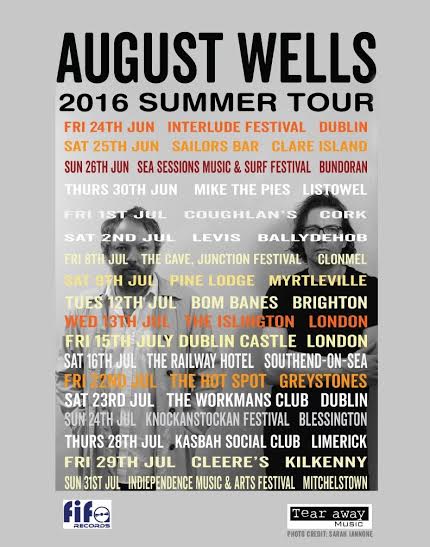