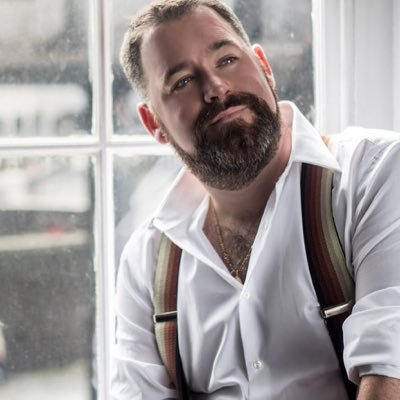 Upstairs in ‘Avenue’, Nick Munier’s restaurant in Temple Bar, has recently opened as a performance area for musicians, comedians and artists.  An intimate space dim-lit with soft decor and seating, it definitely has that side street, cabaret club vibe to it and is a refreshing and novel place to be in.  A spacious stage area, floodlit in red and with crystal-clear sound management, it was ideal for this evening’s entertainment.  Eight flawless musicians including ‘The Retrospect Quartet’ and their engaging lead vocalist.  Surrounded by family, friends, colleagues and supporters this was Graham’s first time performance here and my first time Graham J performance; it certainly won’t be my last.

On his twitter profile @grahamjsings  his bio reads: “Hailed as the Vanguard of Cabaret Noir, an emerging genre of music blending jazz, blues, opera and adult pop known for its dark subjects and emotional impact.”  Graham is not a classical cover artist, that would be an insult.  He is the real deal.  He is an impeccable, effortless and honest performer.  His authentic vocals and ranges are untouched and he is in control of his performances, each one as magnetic as the next. This show was a masterclass in art, music, comedy and drama all rolled into one.  Jazz, Blues, Opera and Swing have told their own stories throughout the years defined by the artists who performed them. Graham is taking these genres to another level that is gaining him a more universal audience, thus making him a recognised, contemporary and consummate performer.

His set list was an impressive selection of his heroes, influences, self-penned and co-written numbers that embodied all of the above genres, but also his pragmatism and life experiences.  From David Bowie, Joni Mitchell, Peggy Lee, Sinatra and Streisand, Shirley Bassey, ‘Les Miserables’ and ‘Carmen’ masterpieces to more recent artists like Will Young, Anthony & The Johnsons and Sia.  His musicality and arranging on these songs were utter perfection and comforting to the ear, especially Sia’s ‘Chandelier’ which for the first time I could understand the song’s message. His Irish offering of ‘My Lagan Love’, ‘Bring Him Home’ Gershwin’s ‘Summertime’ and Nick Cave’s ‘Into My Arms’ took you to another place.  I love when an artist does this, you’re in that moment with them and you completely forget where you are, that’s an amazing place to visit, that is the deep impact of his approach to his performances.   ‘I Miss You Most On Sundays’, ‘Till Dawn’ and ‘When’ are his original offerings and these were well received by his loyal audience.

From start to finish, Graham was on form and in control and displayed a wonderful chemistry with his accompanying musicians.  He appeared on stage as an actor/story-teller/writer/performer and looked the part, he was born to do this.  His dialogue in between songs was warm, polite, humorous and inviting.  He is charismatic, focused and positive.  He is really inspired and appreciative of his influences and is grateful to them by honing his immeasurable talents.  He is keeping these genres alive in his own unique way and he’s enjoying it too.  I felt elements of Freddie Mercury, Colm Wilkinson, Frank Patterson, Michael Ball and Alfie Boe in the room.  This is the calibre of artists I would connect him with but he is very much a genuine and individual specialist in what he offers.

Graham’s debut album ‘Wild Is…’ is out now.  Buy it and go see him live, it will be an evening to remember.