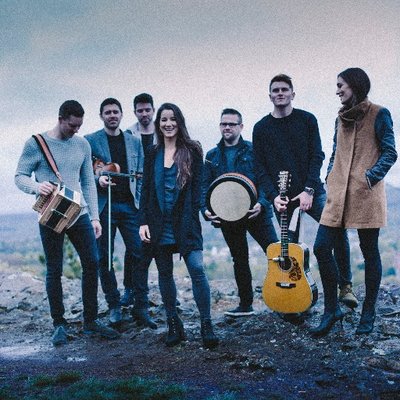 Trad is one of the oldest and reliable music genres in the world.  It’s constantly rejuvenating itself with fresher melodies, arrangements and styles.  The musicians who are providing us with their unique compositions and raw performances are maintaining the longevity of Trad around the world and especially here in Ireland.  The Irish Cultural Academy are at the helm of showcasing many Irish Folk, Celtic and Traditional acts worldwide including ‘Project West’.

High praise must first go to Kevin Meehan and his accompanying musicians who performed a few sets at the start of the evening.  Kevin is well known in Dublin’s Temple Bar area as a versatile Trad musician and has also performed live many times with Barry Jay Hughes.

When I first think of Irish Trad and Folk bands, the stalwarts that pop into my head are The Chieftains, The Clancy Bros, The Fureys, De Dannan and Na Fianna; all very worthy contemporaries and all are still going strong with experience and longevity being the keys to their successes.  Project West though are not just a band, they are an event.  An exceptional production of music, song and dance, they are quite simply a force of nature.  They are the most unique combination of quality, talent, skill and showmanship that I have seen and heard in the Trad genre for a very long time.  They are bringing something new, original and different to the table.  Having just completed a 100 date US tour, here they were performing for the first time in Whelans as part of their current Irish tour to promote their self-titled debut album.

Comprising of Irish and UK members, each one had their own humorous and warm introductions between performances, but I have to hand it to Niamh Farrell, the female vocalist of the group.  She is such a charming storyteller and has an inviting personality. Her voice is raw and honest and her diction does justice to the covers she performed.  ‘Mary and the Soldier’, ‘My Father’s House’, ‘Liberty’s Sweet Shore’, ‘Set You Free’, ‘I wish I knew how, it would feel to be free’ and her finest moment, a sean-nós performance of ‘Eleanór a Rún’.  Her range was flawless and true, she carried it to another level that was distinctly her own.  She reminded me of the steady and reliable vocals of Dolores Keane and Maura O’Connell.  Sean O’Meara also performed Dylan’s ‘Don’t think twice’ that came to life with the group’s trad injection of it.  Another solid and worthy vocalist he is too as were the rest of the group’s backing vocals on these songs.

When it came to the jigs, reels and polkas, the dynamic on stage and in the room was certainly heightened.  These artists know their musicality and are not one bit afraid to show it.  The pace, timing, tempos, momentum and blending of their solos and medleys are so controlled, polished and professional.  You’re dealing with naturals here. These are feel good, foot stomping arrangements composed and covered by passionate driven, highly skilled and experienced musicians.

Irish dancer and group member Siobhán Manson (Riverdance) was accompanied on stage with another Irish dancer Cathal Keane. Their flair and coordination was impeccable and what I loved most about them were their smiling faces and communication during each dance.  Cathal performed a memorable solo tap dance alongside a solo Kieran Munnelly on the bodhran in perfect harmony and rhythm.  Later on, fiddle player Colin Farrell and vocalist Niamh joined Siobhan and Cathal for a lively set piece too. Everyone in the group was smiling from start to finish and you could see how much all of this meant to them. They absolutely love what they do and the chemistry is oozing from them. Fun, warmth and good vibes all night long.

Project West’s impact is powerful, their audience diverse and their musicianship immense.  Their youth is their energy and their passion is exciting and positive.  They are masters and mistresses of their crafts, a very impressionable outfit with massive appeal and dynamism.  Trad isn’t going anywhere with the calibre of artists who are keeping it alive but the story is different now and the bar has certainly been raised.  Kudos to Project West.