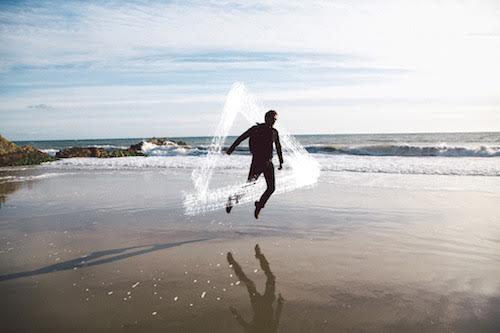 Trickster Guru is the alternative rock and electronic project of singer songwriter, multi-instrumentalist and producer Christopher Caplan.  Trickster Guru’s debut EP “Problem Child”, beautifully fuses vintage rock and soul with the excitement and innovation of modern electronic synth. Like a poignant conduit between the past and present, “Problem Child” draws influence from rock anthem greats such as The Doors and Jeff Buckley as well as modern electronic artists such as Flume and Skrillex.  The added synths and beats from alternative electronic co-producer AWAY, allows Trickster Guru to ingeniously create a sound of passion, culture and indulgence.

Although Trickster Guru began as a two-piece garage rock band in 2013, the band sadly broke up before self-releasing their debut EP “Black and White” in early 2014 after a near fatal car accident in the desert. This experience inspired the first single off the new EP “Feel the Spirit.”, one of their tracks to be featured on NPR’s KCRW. Between creatively addictive yet divergent hooks, “Feel the Spirit” reflects the spiritual seeking and psychedelic culture of Los Angeles while addressing, through its narrative, the heart-breaking realism of the city.

The “Problem Child” EP features mastery from Nick Stratton, Jason Aguja, and Dylan Fenley. Trickster Guru reveals ‘the new EP was a way of coming to terms with my past – artistically, emotionally and spiritually.”  This is ideally demonstrated with the stunning accompanying music video shot in Astoria Oregon, which pulls inspirations from the surreal, gritty and realistic style of David Lynch, and also features the talented musician and model Lindsay Perry. Buzzbands LA praised “Problem Child” as ‘a collection of bluesy pop and unrestrained rockers that display substantial range yet are not always what they seem’.

Following the “Problem Child” EP release show at “It’s a School Night”, and recent performances at The Satallite, The Study and KCRW’s Summer Nights, Trickster Guru continues to organically gain media attention and radio play including Buzzbands, KCSN and KXLU. Trickster Guru’s unique understanding of technology intersecting with music via augmented reality, shows an honorable dedication to the future of music, of which he hopes to create his own pathway and musical culture.