The 4 Of Us have been a steadfast part of Irish music history for over a quarter of a century. Formed and fronted by Newry-born brothers Brendan and Declan Murphy, they have developed a unique musical identity, which has produced original and award- winning recordings, as well as a large and loyal fan base. To date, they have notched up an enviable catalogue of timeless songs, including six top 20 Irish charting albums. Their music has also been featured extensively on American, UK, and Irish TV soundtracks.

The 4 Of Us shot to early fame towards the end of 1989 with their debut Songs for the Tempted, which featured the massive hits Mary and Drag My Bad Name Down. The follow up Man Alive made Q magazine’s prestigious Top 50 Albums of 1992 and included the UK Top 30 song She Hits Me.

‘Sugar Island’, their latest album, is due for release on October 28th 2016. Lyrically, the album explores the brothers’ early years growing up in Northern Ireland; musically, it focuses on the trademark interplay of their acoustic guitars. As singer Brendan recalls: ’It was a dark time for sure, but as kids we still managed to have a lot of fun. Everyone who lived through that time has their own stories to tell; we thought we’d share some of ours.’

Promising to be one of their best studio recordings yet, Sugar Island features 12 new songs. It is arguably their most biographical album, including tracks reflecting on the brothers’ childhood, growing up in a border town during the height of the troubles in Northern Ireland.

The Band perform in Dublin’s Vicar St. Nov 11th where the Murphy brothers will be joined by their original band line-up to perform their debut album Songs For The Tempted, along with their latest, in show entitled Then and Now. The lead radio Single “Sugar Island” refers to the landmark heart of their hometown, which was also a popular meeting place for young lovers. ‘On the day I left you crying, on the bridge at Sugar Island’, as the lyric goes.

This is also out Oct 28th along with the album. For more info and a full list of tour dates + social media links go to: http://the4ofus.com/ 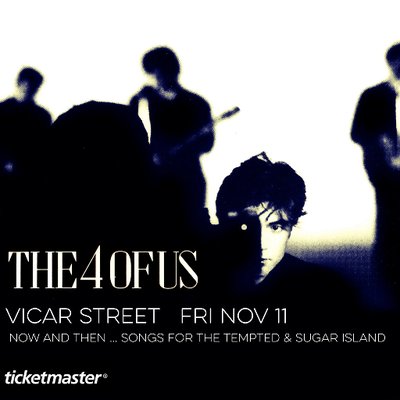