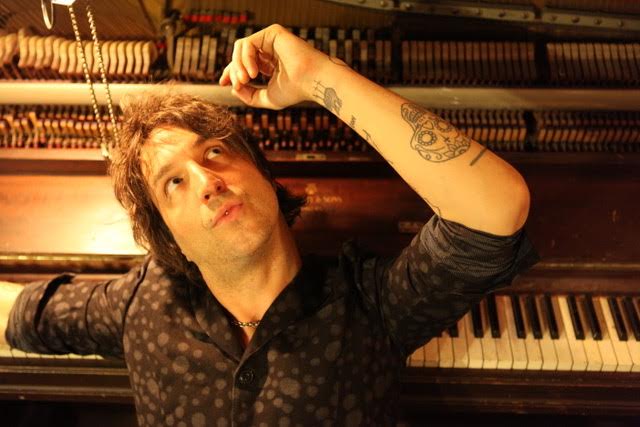 “His influences are plain enough – Dylan, Waits, Cobain – but by the end he sounds like nobody but himself; dark, lovelorn and clever.” – The Observer

“Joseph Arthur’s an oddball songsmith who weaves words, guitars and a whole heap of discordant sounds into songs that hang around your head long after they finish. The sound is spooked, wildy introspective, yet wide open enchanting.” – Uncut

If anyone is truly deserving of the title of ‘artist’, it’s the mercurial talent that is Joseph Arthur. He’s been unleashing material for over a decade and a half, his sheer poetic nature and experimental drive gaining him a deservedly fine reputation in the process. Now the singer-songwriter is back with a new album for Real World Records – ‘The Family’ –  his fifth for the label that signed him in 1997. Smart, soulful and intricate in ways that most songwriters can only dream of, Joseph’s songs are bursting with ideas – emotionally raw and unyieldingly inventive. His throaty delivery lends a vulnerability to both the beautiful acoustic melodies and harder-edged, expansive driving rock.

Joseph Arthur is a singer, songwriter, poet, and artist from Akron, Ohio, known for his solo material, and as a member of RNDM and Fistful of Mercy. Combining poetic lyrics with a layered sonic palette, Arthur has built his reputation over the years through critically acclaimed releases, collaborations and constant touring; his unique solo live performances often incorporate the use of a number of distortion and loop pedals, sometimes live painting and a sprinkling of beat-poetry.

His 20+ albums range from solo records to collaborations with a who’s who of rock‘n’roll, including Lou Reed, Dhani Harrison and Ben Harper of Fistful of Mercy, Peter Gabriel, T-Bone Burnett, and RNDM with Pearl Jam’s Jeff Ament.

Originally discovered by Peter Gabriel, and subsequently signed to his Real World record label in 1997, Joseph quickly established a reputation as a formidable and creative talent with his experimental folk-rock style, diverse instrumentation and eclectic electronic production elements. Live, he pioneered the use of loop pedals and layered vocals years before Ed Sheeran et al picked up on it. An accomplished painter, he’s displayed his works in galleries around the world, and his online-only Museum of Modern Arthur (museumofmodernarthur.com) serves as a repository for his creations. He is also a prolific writer, principally of poetry but has also written a children’s book!