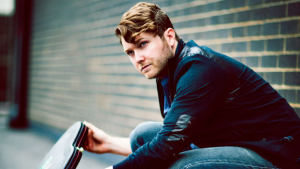 Pop/Soul singer and songwriter, Luke Wade’s mournful rasp and earnestly heartfelt songwriting bid comparisons between Wade and singer/song-writers like Ray LaMontagne, Van Morrison and Glen Hansard. Growing up on Hurt Street might seem an auspicious beginning for a soul singer but for Luke Wade, of Dublin, Texas, it’s hard to imagine that it would be anything short of destiny.

Born of extraordinary artists and self-described ‘Hippies’, with a landscape painter for a Father and a Yoga instructor for a Mother, Luke is the product of a home that truly cultivated creativity. The youngest of four children, his music is the modern manifestation of the introspective and enlightened notions instilled by his parents.  Bob and Wanda spawned a self-awareness that makes Luke’s music inherently reflective, without need of gimmick or novelty.  He is no stranger to the sometimes heartache he writes about in his music. As a teenager, Wade suffered a severe injury after being shot in his right eye with a paintball in May 1997. The injury left him with partial blindness and no depth perception, so he had to quit most of the sports he played at school.

Luke was a Top 8 Finalist from Season 7 of NBC’s Emmy Award-winning music competition, “The Voice”. Since his run on the show, Luke has headlined over 200 dates and opened for Patti LaBelle, Andy Grammer, MKTO, Train, Daughtry, Blue October, Green River Ordinance, Ingrid Michelson, Casey Abrams, Kris Allen, Jerry Jeff Walker, OAR, and David Cook. Luke finished his tour with performances for the halftime show of the Denver Broncos game at Mile High Stadium, AT&T Stadium during the Dallas Cowboy game and performed the National Anthem at Texas Motor Speedway which was nationally televised on NBC. He was on tour with Toad the Wet Sprocket, Rusted Root, and Edwin McCain throughout July and August of this year.   As the official 2015-16 Komen Artist, he recently released “Ain’t No Mountain High Enough” with Mia Z to benefit Susan G. Komen and the fight against breast cancer. His New Single: “Three Days” is Out Now